A view over Vienna...

That Vienna is a very special city with many beautiful and exciting places, you already know.

Today I have a small, fine selection of places in Vienna from which you have a fantastic view over the city.

There are now several "possibilities" how you can view over Vienna. Yes you are reading correctly. So if you are searching only for the view, I recommend you the variant "Pure view".

There is the easy to reach "mountain" the Kahlenberg. Just go there by car or bus, get off and enjoy the view. There is also a restaurant, a cafe and a hotel but this is already another category, culinary view.

The second very prominent possibility is the Wiener Riesenrad. As a landmark of Vienna, it is known worldwide and it is also easy to reach. One turn around long you can enjoy the view over Vienna.

If you want not only the view alone but also a culinary experience with it, then I also have a few suggestions for you.

Very well-known (and also well-visited) is the Gloriette in Schönbrunn. There is not only the terrace with the view but also a cafe.

From the Donauturm you can get an all-round view of Vienna. The special feature here is that the restaurant turns and you really get a 360 degree view of Vienna.

Very close to the Jubiläumswarte (see below) you will find the Schloss Wilhelminenberg, which is actually a hotel. Here you have a wonderful terrace with a great view over Vienna. So you can sit comfortably there, enjoy a coffee or on Sundays even the brunch and simply marvel at Vienna.

A place that is not so easy to reach, but which is more than worth the trip, is the rustic Heurige Hirt. You will find the Heurigen Hirt at the foot of the Kahlenberg and get there via the Kahlenbergerdorf.

If you want to earn the view first, then read on.

In the middle of the city is another landmark of Vienna, St. Stephen's Cathedral. This offers you the possibility to climb the South Tower on foot. 343 steps later you really have earned the view. And after being back downstairs, there are enough places around waiting to reward you.

Also on foot you can climb the anit-aircraft tower in the sixth district in which the Haus des Meeres – Aqua Terra Zoo is located. If you do not want to walk, you can also climb, because on one side of the tower is a 36m high climbing wall.

In the 16th district, already in the Wienerwald, you will find the Jubiläumswarte. It is located on the "summit" of the Wilhelminenberg. The 31-meter-high concrete pillar with spiral staircase and viewing platform is freely accessible, only in the winter months it is closed.

Do you like to hike? Then I have a very nice combination of hiking and view over Vienna. The starting point is again the Kahlenbergerdorf (as with the Heurigen Hirt). This time it's not the Heuriger but the "nose". Yes you read correctly, this trail is called nose way and it leads directly to the Leopoldsberg from where you have again a unique view over Vienna.

There are, of course, many other places from which you have an amazing view over Vienna and also your host certainly has its own personal favorite place. So just ask. 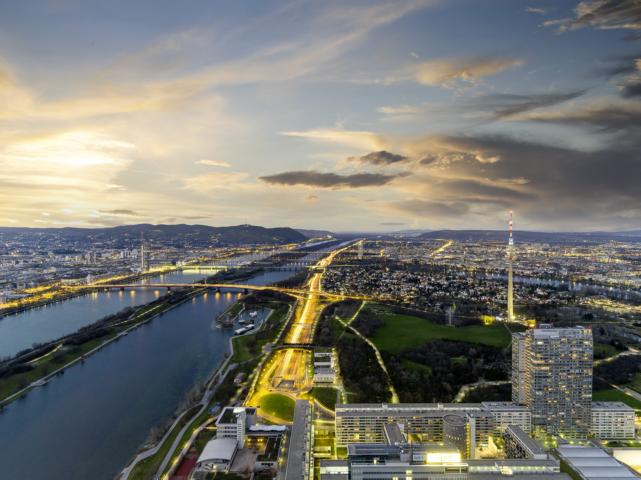